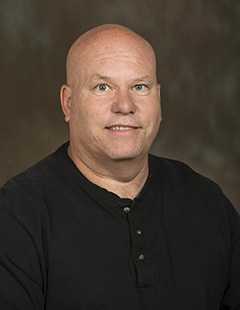 Jeff Tye came to Cedarville University to work as a Network Engineer in Information Technology in early 2015. Before landing in Cedarville, Jeff grew up in Fairborn, and served in the Air Force for 33 years, mostly at the Guard Base in Springfield. His title, Superintendent of Predator Networks, hints at the notable military work he was involved in. He worked with drones much of the time which required quick thinking and good decision-making in life-or-death situations.

Today, Jeff resides in Cedarville with his wife and three children and manages Cedarville’s network and information security systems. His job requires him to be both at a desk and out around campus doing hands-on work. He says that network engineering is more important than ever because “as students have more and more devices that are networked, we have to keep up with the changing technology and infrastructure.” There is constantly work to be done, leaving him with little free time. He tries to never focus on the clock and the amount of time it takes to do something, but to just focus on finishing the task at hand.

Jeff encourages students to “pay attention to detail and make sure you don’t miss a piece,” especially those thinking about his line of work. In the military, any oversights or slip-ups could cost a life. Although the consequences may not be as dramatic in Cedarville’s IT department, a student may feel as though a Wi-Fi outage is an end-of-the-world catastrophe. Jeff and the network team are here to make sure that doesn’t happen.

Posted in: IT Newsletter Articles